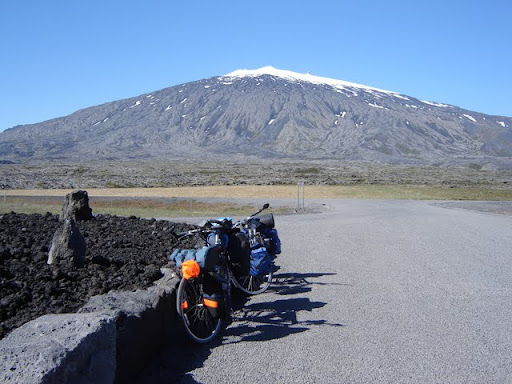 The sleeping giant of Snæfellsnes


Benoit and I set out on our world tour by bicycle, leaving Canada in May 2010 and starting in Iceland. The Eyjafjallajökull volcano erupted in March after some two hundred years of dormancy. Two months later, when we arrived, the volcano was silent yet still reminded us of its presence. I kept a daily journal full of details like where we camped and how much it cost. The stuff that Benoit calls that boring shit that no-one wants to read. An excerpt:

This was the day of the "black rain". Ash particles from the volcano fell with the raindrops leaving everything with a muddy gray layer. A man stopped me to recommend that we cycle with masks to avoid breathing in the muck. The masks we bought were costly (about $20 Canadian for 5) and annoying to wear, but I kept thinking that this would be good practice for cycling at higher altitudes where you can't breathe as well. By the time we arrived in Þingvellir, we were covered in gritty dirt. Nevertheless, the isolated road was so tranquil. I kept losing myself to the surroundings.

In case you're interested in all the boring shit, the links below will take you there, in pdf version on Box.net:
Posted by Lazy Daisy (Michèle) at 8:42 AM 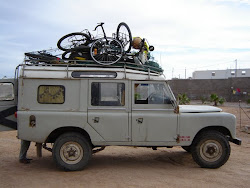